Below is the current state of front panel art of Argon drive. The enclosure will be made out of steel sheet metal + aluminium heat sink plate as bottom. Front side of the drive will have silk screen printed artwork. 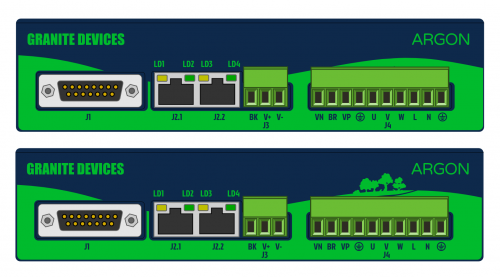 Which one of the variations you’d prefer? With some trees or without. Please leave a comment!

Yesterday was a day full of sparks – electrostatic discharge sparks. Tests were done by shooting sparks to to different targets including cables, casing and open connectors while the drive was operating. Also various ESD types were tested: contact discharge, air discharge, varying voltages and different polarities. All ESD tests were passed without a single hiccup. 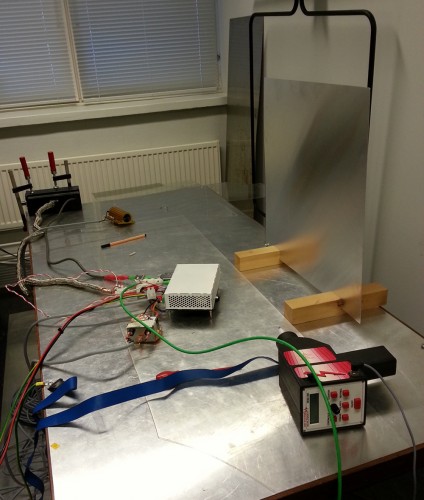 However, ESD is only one mode of high voltage harassment drive must cope with. Another test type is EFT (electrical fast transient) which is induced to cabling through capacitive clamp. Several kilovolts with nanosecond scale rise times were injected as 75 spike bursts into the clamp at frequency of 5 kHz and repeated 10 times. This simulates interference spikes emitted by nearby sparking or EMI. No problems recorded. 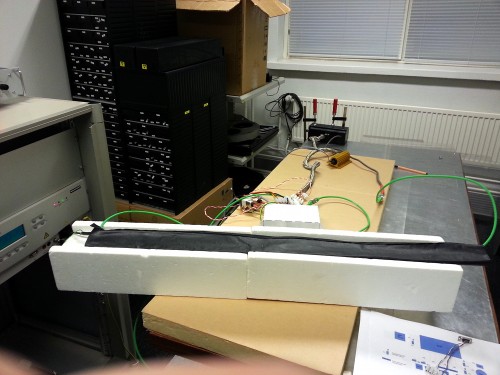 The last test was a surge test. A high energy and relatively long pulse were applied to supply voltage inputs. This is typically the most difficult harassment to filter out in electronics. 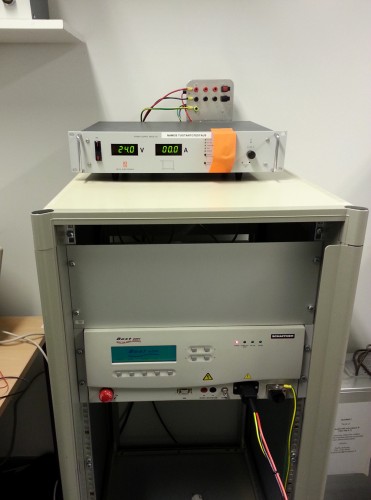 Surge & EFT test equipment – above is the 24V PSU and the device below is the EFT & Surge injector.

Difficulty of surge may be imagined by the funny fact that cheap lab power supplies tend to die during the test even when it’s not the target. So heavy duty PSU had to be used as supply to avoid it breaking.

In this test we found a problem. The voltage regulator of Argon died when shot with 400 V and ~40 A pulse in negative polarity to 24V input. However, drive survived a 500 V positive polarity surge. 500 V is the required level to pass the test. Failing one tests means that some circuit/layout changes has to be done to address the problem.

Bootloader (a.k.a. IAP = in application programmer or DFU = device firmware upgrader) is a piece of software in microcontroller to make programming of a new firmware inside the device possible without accessing the chip physically with a programming tool. In Argon’s case firmware upgrade will be possible through the SimpleMotion port and Granity software.

I have spent couple of last days finalizing the bootloader of Argon. Even though the amount of code is small, it must be written with extreme caution because a bootloader bug could lead to bricked device that need to be re-programmed in the factory, or worse, induce permanent damage to hardware. Bootloader is also the part of software that cannot be upgraded by the end user, so we have no change to fix the possible bootloader mistakes remotely after devices are shipped.

In our goals, bootloader must be robust enough to make it impossible to brick the device. This includes the cases where incorrect or corrupted firmware is being sent, or power is being cut in the middle of the firmware upgrade process. Bootloader should be also tolerant for some hardware errors, such as broken crystal oscillator.